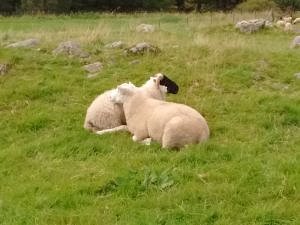 Lleyn perform as well as Scottish Blackface in the Scottish Highlands

SRUC Blackface
ewe with Lleyn x lambSRUC’s Hill & Mountain Research Centre, at Kirkton & Auchtertyre farms near Crianlarich in Scotland, has received funding from the Scottish Government (RESAS) for the past 5 years to look at performance differences between breeds of sheep within one of our flocks, consisting of 300 Lleyn and 600 Scottish Blackface ewes. Apart from mating time, where the animals were in single-sire mating groups, the animals ran together as one flock throughout each year. The farm is around 2200 ha in total, with over 1500 ha of unimproved rough hill grazing and only 230 ha of improved or semi-improved inbye ground. The average annual rainfall for the area is just over 2500mm and the altitude ranges from 180m to 1200 m. All animals were mated on the inbye ground, and then spent the winter between the hill and inbye ground. Ewes were ultrasound scanned mid-pregnancy, and then lambed on the inbye ground in April/May. Ewes with single lambs were moved back to the hill grazing in June, whilst those rearing twins remained on the inbye ground. Lambs were finished on farm, trying to keep them on grass for as long as the weather and grass availability would allow, before they were housed and moved on to a more concentrate based diet.

The preliminary results of this research suggest that Lleyn ewes can perform under harsh conditions as well as Scottish Blackface ewes. Now that data collection is complete, these similarities in performance will be verified using statistical data analysis. The performance of these two breeds will be further tested in the coming 5 years where the breeds will be compared under two contrasting management systems, each making greater or lesser use of the extensive hill ground during different periods of the year.