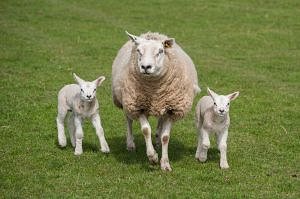 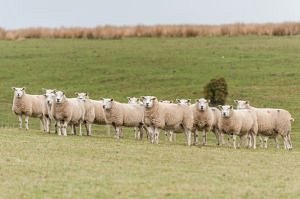 Producing What the Market Wants

Doe Hill, Morpeth in the North of England is the home of a sheep enterprise which makes the best of the maternal qualities of the Lleyn ewe whilst working alongside terminal sires.

Kris Gray has been farm manager at G.N. Potts & Son since October 2012.  All the shepherding is done by Kris and his partner Maggie.  The 650 area Northumberland farm carries 550 ewes, comprising 360 Lleyn, 40 Beltex x Lleyn, 120 Beltex x Lleyn ewe hoggs and 150 Hexham type Blackface.  There is also a herd of 130 suckler cattle.

Kris first came across the Lleyn when he started working at Doe Hill.  “I had never worked with Lleyn before but I have found them easy to work with” says Kris.  Kris found that the Lleyn works well alongside the cattle.  When the cattle are housed during the winter, the Lleyn can be moved on to their ground and can go through most of the winter without supplementary feeding.  He has found that the lambs appear to have a higher resistance to worms hence they require less dosing than some of the other breeds he has worked with.

Lambing time at Doe Hill usually starts around the 5th April enabling calving to be finished.  This often falls in the school holidays hence the children are then available to help, “children are great for catching lambs” says Kris.  All lambing is done outside after the ewes have been out-wintered.  Ewes carrying twins get 1lb of nuts per day in the six weeks up to lambing.  Those carrying singles get nothing.  The overall scanning percentage is around 185%.

The majority of the Lleyn and Lleyn x ewes are put to the Beltex or Texel with all lambs being sold through the weekly market at Scots Gap.  About 150 Lleyn ewes are put back to the Lleyn to produce the replacements helping to keep a closed flock.  All lambs are finished off grass.  The aim is to get them above 40kg and away by Christmas.  Recent success saw the Doe Hill flock awarded reserve champion for a pen of Beltex a Lleyn lambs at the Christmas Prime Stock Show.  Of the lambs sold in 2015 the Beltex x Lleyn averaged £80 for +40kg.

Kris enjoys working with the Lleyn for a number of reasons.  Their easy nature alongside their ability to out-winter on minimal feed and they can be lambed outdoors.  He says they are great mothers with the ability to produce lambs that suit the needs of the live market.  “The Lleyn is a very versatile sheep, very low maintenance when tupped pure, yet in my opinion she worked even better when crossed with a terminal” says Kris.

“I find the Lleyn ewes can almost live on fresh air.

They have really surprised me in the time I have worked with them.  I think for definite the best thing about the Lleyn is the maternal instinct, they never leave their lambs.  Being able to get a 45kg tight skinned lamb good enough to sell through the live auction ring, from what is effectively a hill sheep is quite amazing!”